Chat with us, powered by LiveChat Handling Common Wildlife Encounters While Camping | RJourney 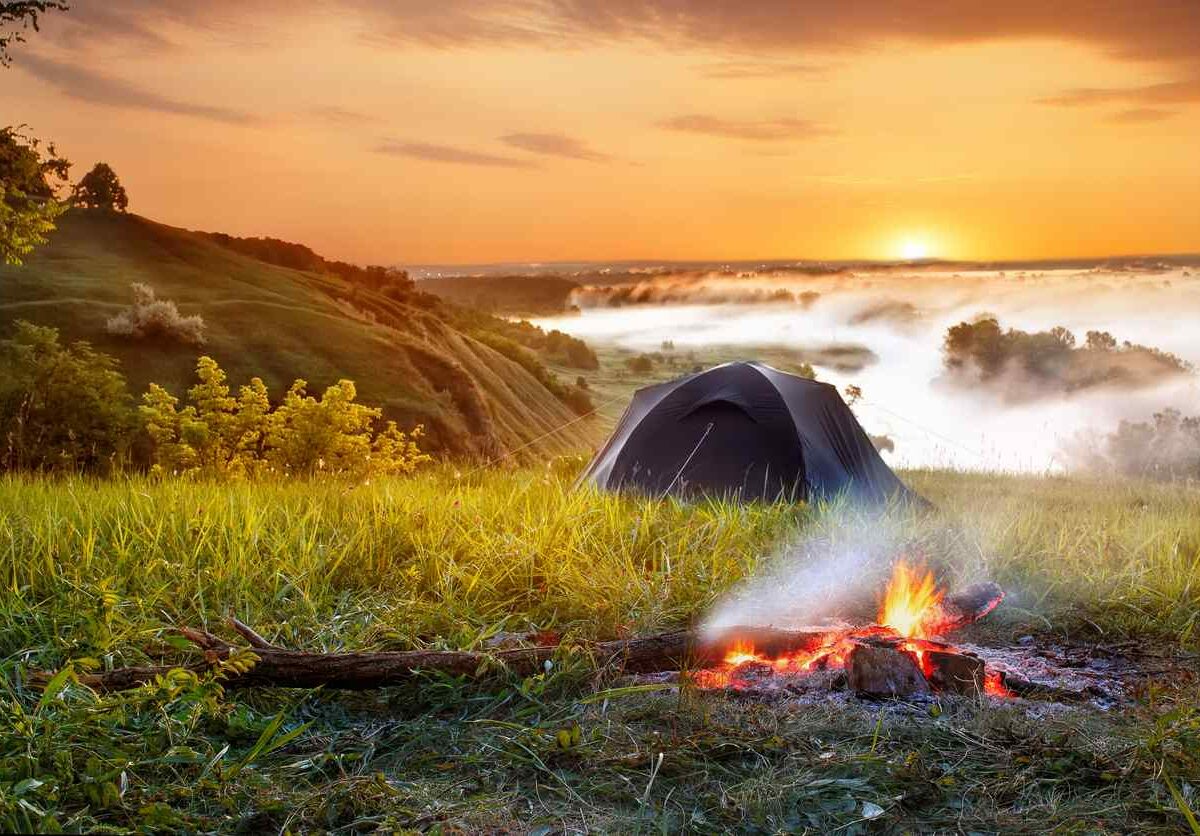 Camping is a way to take you back to your roots. Surrounded by the wilderness and with the wind in your hair, there’s no better way to experience the great outdoors than going camping. You get to enjoy the beautiful, peaceful sights during the day and can sleep under the stars at night, whether that’s tucked into a sleeping bag inside an A-frame tent, nestled inside your RV, or even enjoying one of Rjourney’s luxury cabins.

But when you’re out in the wild, it’s likely inevitable that you’ll encounter wildlife in one form or another. Common wildlife sightings include squirrels, birds, coyotes, and more, but some forms of wildlife can be more troubling than others. When these encounters happen, it’s important to know how to handle them safely and responsibly and how to protect yourself from wild animals while camping. Knowing how to prevent encounters is also key to avoiding situations altogether.

Types of Wildlife Encounters You May Have While Camping

When you’re camping, there’s a wide range of potential encounters you may have. Not every wild animal poses a threat to you and your family, and it’s far more likely that the animal is going to be more afraid of you than you will be of it. However, having knowledge of how to approach specific wildlife encounters can be key to keeping you safe and avoiding unnecessary conflict.

The chances of encountering various types of wildlife greatly depend on where you’re camping, but several types of wildlife can be found across most of the United States and serve as common concerns for most campers. Still, it doesn’t hurt to research the area you’re camping beforehand and equip yourself with the knowledge of what to expect from that region specifically.

When camping, you should always aim to avoid confrontations with wild animals, and you should strive to not disturb their habitat as much as possible. Maintain a clean campsite, avoid littering, and keep in mind that you’re a visitor in their home. But in order to help you best handle a potential wildlife encounter, we’ve assembled a list of advice for interacting with common wildlife, so you’ll know what to do should a situation occur.

What To Do if You Encounter a Raccoon

Raccoons are curious, intelligent scavengers who are most likely to venture near your campsite in search of yummy food scraps. They’re nothing to be afraid of, but don’t provoke them, because they have the potential to be aggressive or territorial if driven to such measures. However, most raccoons can generally be driven away.

Raccoons are usually nocturnal creatures, so you’re most likely to have an encounter after dark. You’ll probably hear them before you see them, possibly snorting or chittering, or you could hear the faint pitter-patter of little feet in the dirt or rummaging through trash left outside.

To chase off a raccoon, making yourself known is likely enough. Stand up tall, shout, and wave your arms to appear large and scary. However, if the raccoon seems aggressive, disoriented, or is staggering, it may be sick or injured. Raccoons are frequent victims of the rabies virus, and you do not want anything to do with rabies. Spray water, throw rocks, or use a cayenne pepper spray, as raccoons dislike spicy smells.

If the raccoon is abnormally persistent, prioritize your family’s safety and retreat until it eventually wanders off.

How To Manage a Deer Encounter

Deer often appear to be calm, peaceful creatures, and you might even smile when you see one in a field or standing at the edge of a forest. They can be beautiful animals, and they’re generally timid and will flee at the sight of strange movement. However, just like almost any animal, deer will defend themselves or their young when they feel threatened. And despite having such delicate-looking legs, those hooves can do some damage.

There is an increase in notable deer encounters during the spring and fall. During spring, mothers are protective of their vulnerable young. Meanwhile, bucks become hormonal during the fall and could behave aggressively. If a deer has gotten close to your campsite, first and foremost, do not approach it, and certainly do not try to feed it. Instead, leaving the area is best to avoid an altercation.

If it refuses to leave your campsite or you’re already caught in an encounter, yell, scream, and do whatever you can to appear larger to intimidate the deer. If that isn’t enough, remove yourself and your family from the area until it goes away.

Opossums Near Your Campsite

Opossums have a worse reputation than they deserve. Their sharp teeth and rat-like tail might make you uneasy, but you’ll really only see those teeth on display if the opossum is using its defense mechanism.

When threatened, the opossum will open its mouth wide and hiss in an effort to ward off a predator, but it is almost guaranteed to flee if given the chance. Otherwise, a cornered opossum will famously play dead to prevent an attack. The chances of an opossum actually standing its ground are slim to none, as mother opossums carry their young and will therefore be able to escape with them if she needs to flee.

Opossums are skilled at staying undetected, so you may have one or two near your campsite and not even realize it. But if you do see one crawling around, not only will it leave you alone, it’ll probably scamper off if you make any move toward it. Perhaps you’ll even thank it on its way out, as opossums eat hundreds of ticks, mosquitoes, and many other bugs you don’t want around!

What To Do When You See a Bear

Of all animals on our list, bears are unsurprisingly the one wild animal you should be most concerned about. Negative encounters with bears are more often caused by human carelessness than being a result of an aggressive animal, which means it’s all the more important for you to understand how bears work and what to do if one is nearby in order to prevent an attack.

Black bears and grizzly bears are the two most common types of bears in North America, and they’re both highly intelligent animals. If you spot any kind of bear nearby, avoidance is your best bet, but you may not have that option if the bear has entered your campsite.

If it’s a black bear that you see, which is typically smaller in size with dark fur, it’s more likely to flee. Shoo it away by being loud and appearing large.

However, if a grizzly bear, you need to be more cautious. Grizzly bears have brown fur and have a distinct hump on their upper back. Grizzlies are more aggressive than black bears, so if one has entered your camp, do not make yourself appear like a challenge. Face the bear, speak in a soothing, appeasing voice, and move away slowly.

In either case, do not run, as running can spur the bear to chase. Make sure you have control of your pets and children to keep them from bolting or making excessive noise. Do not come between a mother and her cubs if you see them. If bears are a known frequent occurrence in the area you’re camping, check to be sure that bear spray is allowed and carry it with you if it is.

How To Prevent Wildlife Encounters While Camping

It’s just as essential to know how to prevent wildlife encounters altogether as it is to know how to properly handle them when they do happen. When you’re camping, operate with a “leave no trace” mindset. Not only can this help preserve the ecosystem you’re visiting, but it can also help you make your campsite less attractive to wildlife by creating less of a disturbance.

Keep your food and trash picked up and put away securely in sealed containers to eliminate odors and to make sure the scent doesn’t travel. Choose your campsite wisely by selecting a spot that is open with little to no grass, few trees, and minimal brush, which is already an area that wildlife won’t frequent as much and will therefore be a way to discourage an animal’s approach. Fire is a natural deterrent for animals but always needs to be watched, so never leave your campfire unattended.

Camp at an Rjourney Close to Your Destination

Camping in state parks and national forests might immerse you fully in the wilderness experience, but with that comes wildlife encounters. Rjourney locations are often close to popular destinations, allowing you to spend the daylight hours exploring the wilderness and enjoying the views but also allowing you to sleep in a more comfortable place with a reduced likelihood of a wildlife encounter.

Several Rjourney campsites also have cabins you can rent for your stay. With sturdy walls between you and the outdoors, wildlife is far less likely to bother you during the night. If you rent a cabin that is equipped with a kitchenette or full kitchen, you can prepare your food indoors and not have to worry about the scent attracting any hungry critters.

Find the Rjourney location nearest to your next destination today! Whether you’re making for a weekend getaway or a long-term stay, Rjourney campsites have a range of great amenities to fit the style of camping of your dreams.

Looking for an Adventure?